Welcome back, citizens and friends! I hope that everyone had a wonderful Christmas, a joyous holiday season and a great start to the New Year.  I have a few brief updates I wish to share with you concerning the matters involving your local government's activities over the past month.

Borough Budget and Taxes for the Coming Year

I am happy to report that I supported the 2013 budget, which passed unanimously, and is one of the few balanced budgets of the area municipalities without a tax increase for the fourth consecutive year. The 2013 balanced budget has $1,699,666 in revenues and expenditures.  With a millage of 3.1256, the owner of a home assessed at $100,000 will continue to pay $312.56 in municipal taxes.

State mandated benefits for the police department are expected to cost a total of $110,982 in 2013, compared to the $101,688 spent for the same benefits in 2012. Benefits are also part of the police contract and are a non-negotiable item in the budget, said borough officials."

Let me first state that I believe our Police Department is second to none in protecting the people of McSherrystown, and in ideology, you cannot put a price on the safety of our citizens. That being said, the harsh reality is that this comfort comes with a price.  With estimations based on the increases to the benefits over the past year of $9,294 (+9.1%) and the salary increases of 3.5%, as well as upkeep, fuel and replacement of the vehicles and facilities, we will be faced with a minimum mandated increase of $18,862.38 in police protection expenditures for next year's budget. Some hard choices will have to be made in determining what our resources will support next year.  Will we accept a reduction in police coverage from our current force, will we look to consolidate or merge with another area department, or will we accept the inevitable tax increase that will be necessary to keep our current department intact?  These answers will ultimately come from the people of McSherrystown, should they choose to voice their opinions, lest they defer their rights and put the decision in the hands of the current Council.

This was a necessary expense due to the federal mandates regarding run-off concentrations into the Chesapeake Bay Watershed.  These mandates from the EPA and DEP, being greatly unfunded by the federal or state governments,  must be absorbed by the local taxpayers.  It should be noted that the next round of upgrades, which were originally projected to be needed in 10 years, are now estimated for consideration in 14 years, according to Ed Reed of the Hanover Borough.  Their foresight in the local needs due to growth and expansion will help us stave off the next round of upgrades for 4 more years, and I applaud their efforts.

Other large-item expenditures for 2013 are:

As some of you may already know, I have been elected by the ACBA to serve as the Vice-President for the coming year. The ACBA is a governmental group consisting of representatives from 13 boroughs including Abbottstown, Arendtsville, Bendersville, Biglerville, Bonneauville, Carroll Valley, East Berlin, Fairfield, Gettysburg, Littlestown, McSherrystown, New Oxford and York Springs.

My primary responsibilities will be to monitor state-level legislation via the Pennsylvania State Association of Boroughs and in coordination with our local representatives to the Capitol.  I have been asked to form and chair a Legislative Committee made up of elected officials from the various boroughs, and to review and recommend action on legislation that will affect the constituency of Adams County.  I will also be working to update the ACBA website to keep the citizens informed of our activities, in efforts to get more people involved with our local, county and state government dealings.

The Evening Sun reported, "There are about 6,500 unfunded state mandates that the municipalities are required to pay for despite having no state or federal funding coming in for those mandates," Bolton said. "If the state is mandating these things, they should be giving us at least some money to help pay for them. State mandates are a hardship on our local taxpayers."  One such mandate is the Prevailing Wage Law.

"According to the website www.commonwealthfoundation.org "Pennsylvania's Prevailing Wage Law was enacted in 1961 to protect construction workers from out-of-state competition, mandating that contractors pay the wages that 'prevail' in each region on all government construction projects more than $25,000. This limits the number of construction jobs in the state and forces state and local governments to unnecessarily spend more taxpayer money."
http://www.eveningsun.com/news/ci_22155017/mcsherrystown-councilman-eager-get-started-new-position?IADID=Search-www.eveningsun.com-www.eveningsun.com

I will say that I am not in favor of depending on the state or federal governments to fund our local activities.  However, I am opposed to them dictating what we must spend our money on without giving back some of the funds we send them in taxes each year to pay for those mandates.  This type of governmental regulation is exactly why I am so passionate about representing the people of McSherrystown at the county and state levels.  I believe if we are to take care of our matters at home, we must be able to retain our tax funds locally in lieu of sending them to the upper levels to be handed out to other areas of the state and country.

One of the biggest travesties our local area faces currently is the Small Games of Chance Bill that will take effect in February.  This Law will limit the amount of community funds generated to support our local functions, such as SAVES, as well as contributions from local service and community organizations.  Without the ability to raise the necessary funds in our community, through our own choices of where to spend our own money, our local infrastructure will be drastically and detrimentally effected.  There are some in the state legislation who are pushing for a repeal of this Law, and I urge you to contact our local representatives at the state level to voice your concerns over this draconian infringement of your right to put your money back into your community!

I had the opportunity to tour the upgrades to the Hanover Wastewater Treatment Facility last month. I can say that they have done some great work, and I appreciate the explanations we received from Ed Reed, Hanover's Asst. Borough Manager.  The Evening Sun did a wonderful article on the tour, which included this quote..

"It's definitely a needed infrastructure and I think they planned it out well," McSherrystown Councilman David Bolton said after the tour.  "It's very impressive. They put a lot of money into this project. Everything looks great," Bolton said. 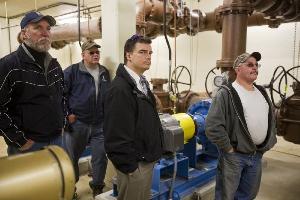 I am happy to report that Shanna Terroso from the York/Adams Regional Smart Growth Coalition, was able to secure a private grant from the Realtor's Association to fund McSherrystown's and Conewago Township's participation in this endeavor for the coming year in full.  I have received a sample Resolution to present to Council at our meeting on the 9th of this month showing our commitment to this project, designed to identify our region's economic strengths and to promote them to businesses, in efforts to attract them to our area and ultimately creating jobs for our people.  I am very excited about working with leaders from both York and Adams County to boost the local economy.

The final meeting saw a vote on the above-mentioned budget, a review of the costs to fix our street sweeper and the reserve capital for a "new" sweeper in a few years, the passing of the 2013 Tax Ordinances (maintained from the rates/charges from 2012), and several Resolutions for the various charges necessary for daily operations of the Borough (also noting there were no increases to these from 2012).

A review of the work done by USG on the Sanitary Sewer Maintenance (which I posted previously) saw all work completed and areas identified for future repairs.  Detailed information can be acquired from the Borough Office should you be interested.

As always, I am here to answer any questions you may have or address any concerns that affect your rights to life, liberty and the pursuit of happiness.  Please contact me anytime...I'm always around!  A happy and safe 2013 to you all.